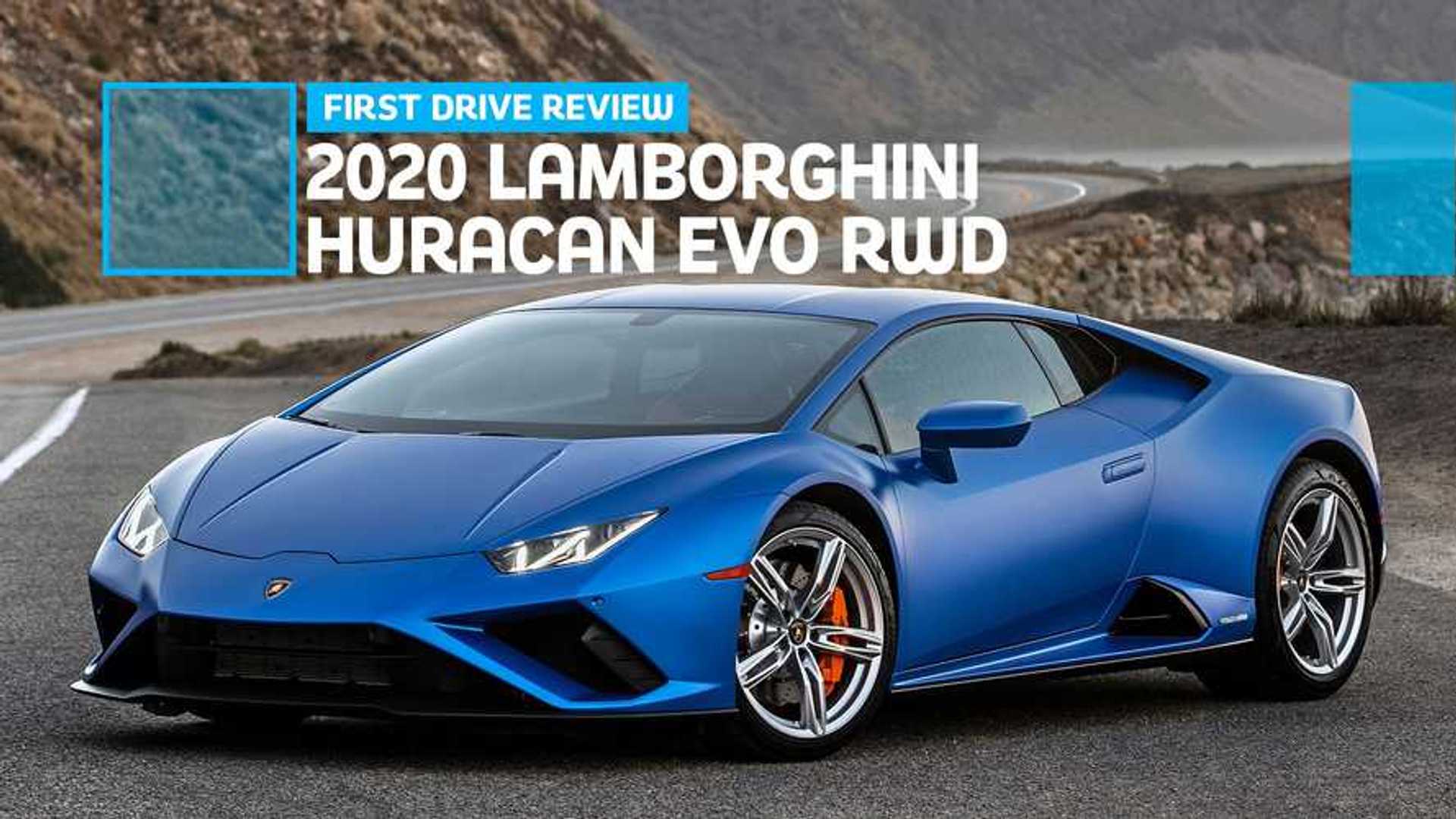 A welcome dose of simplicity.

When it comes to performance driving, “progress” isn't always a good thing. Sure, progress gave us 800-horsepower family sedans and telemetry-rich infotainment systems, but it's also responsible for the steady rise in vehicle curb weights, emotionless turbocharged engines, and safety nets that are quick to scold any potential indiscretion.

Fortunately, the 2020 Lamborghini Huracán Evo RWD has the antidote to each of those issues. And at an MSRP of $208,571, the RWD is roughly $53,000 less than its all-wheel drive counterpart, making it the most financially-accessible Lamborghini you can buy today. But rather than coming in like a bargain-basement version of the model you really want, the Evo RWD serves as a reminder that the driving experience will always be more important than figures on a spec sheet. 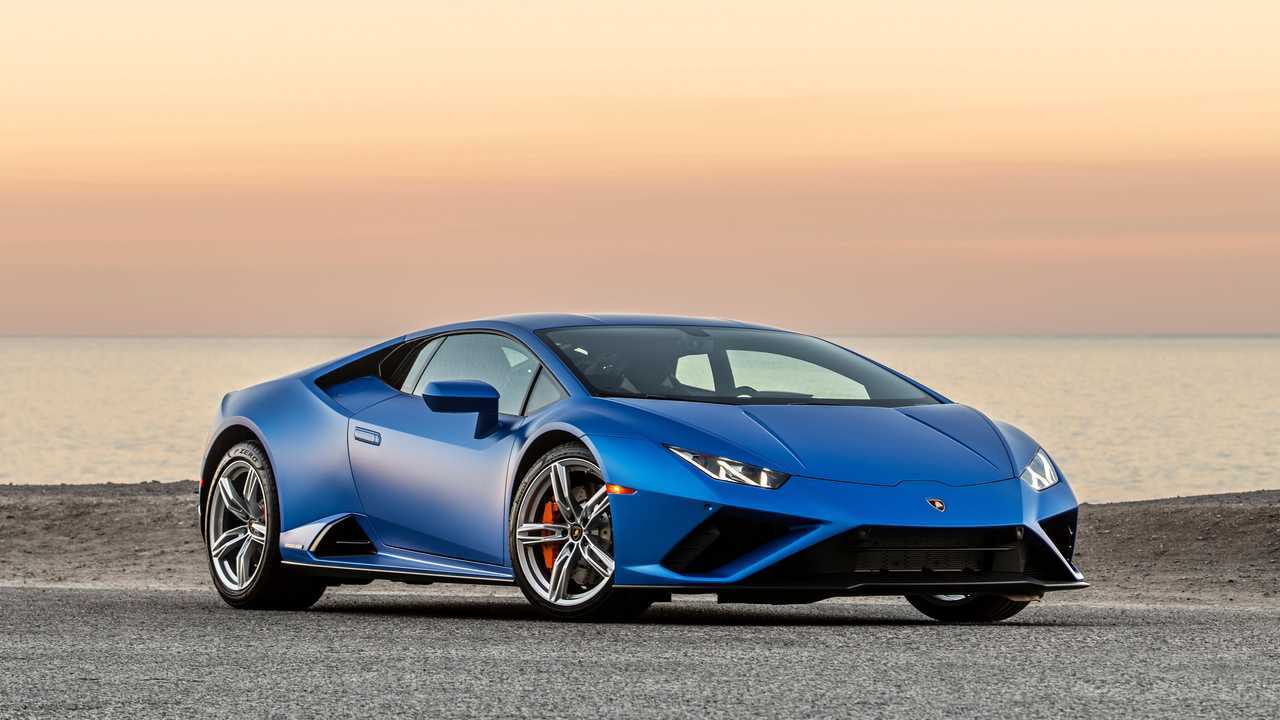 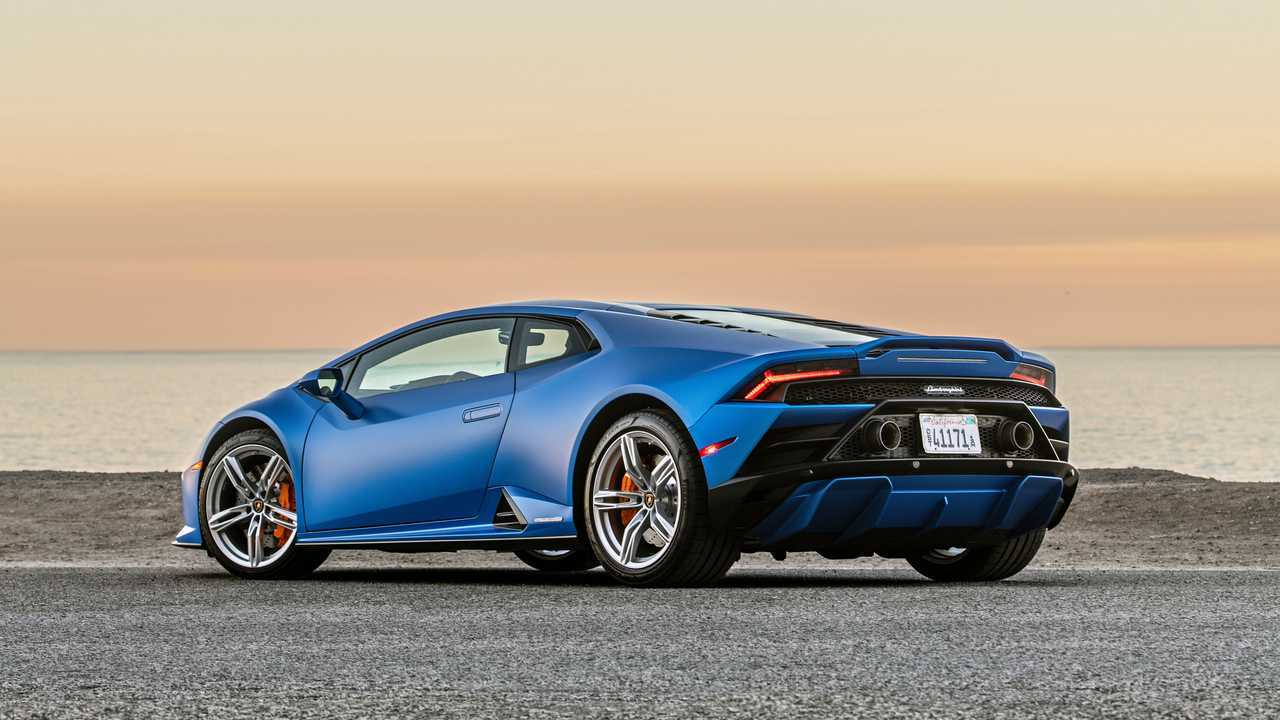 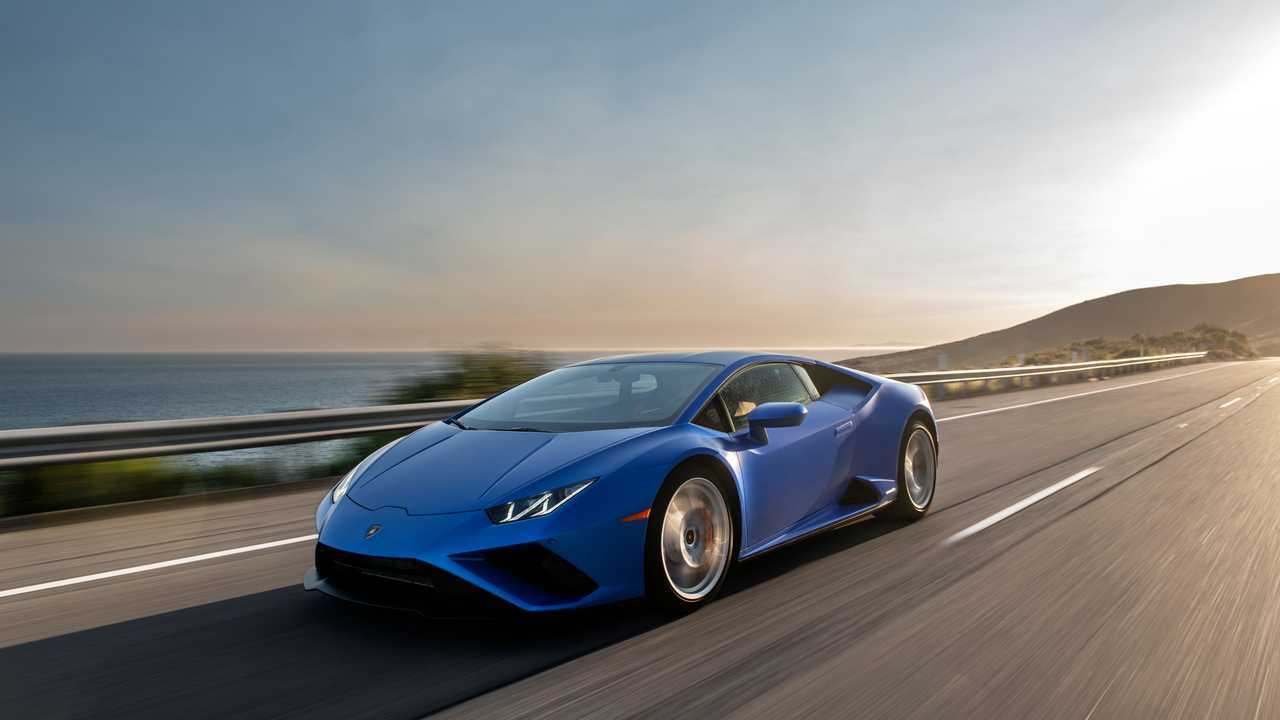 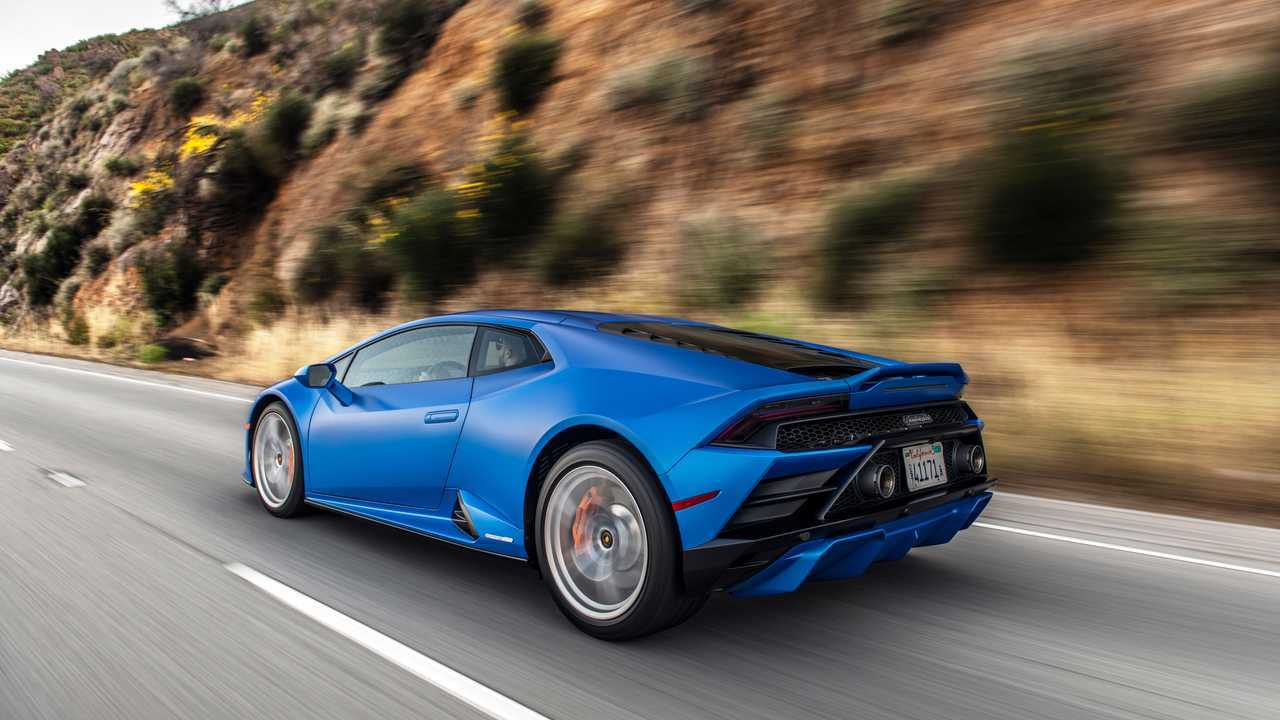 As the name suggests, the primary difference between the standard Huracán Evo and the Evo RWD is that Lamborghini's latest entry sends the power exclusively through the rear-wheels rather than distributing it to all four corners. It still gets its motivation from a naturally aspirated 5.2-liter V10 – here making 610 horsepower and 413 pound-feet of torque – that wails like a banshee as the revs climb to its 8,500-rpm redline thanks to a center-mounted exhaust system cribbed from the Performante. A seven-speed dual clutch transmission still offers near-instantaneous gear changes.

Though it's down about twenty horsepower versus the all-wheel drive Huracán Evo, the RWD coupe is 73 pounds lighter without the front differential hardware, and that equates to a 0-to-62-mph sprint in 3.3 seconds on the way to a top speed of over 200 miles per hour. So it's not exactly a slouch.

“We wanted to get back to the purest driving emotion.”

There are other important distinctions between the Evo RWD and the standard Evo, though. Without an all-wheel drive system to contend with, engineers swapped the predictive Lamborghini Vehicle Dynamics Integration (LVDI) system for the new, specially developed Performance Traction Control System (P-TCS). Torque vectoring is off the table since power isn't going to the front wheels, and the rear-steering system that debuted in the standard Evo is also missing.

“We wanted to get back to the purest driving emotion,” says Alessandro Farmeschi, Lamborghini's Americas Region CEO. “It's an unfiltered experience – you need to rely on your senses and instinct.” 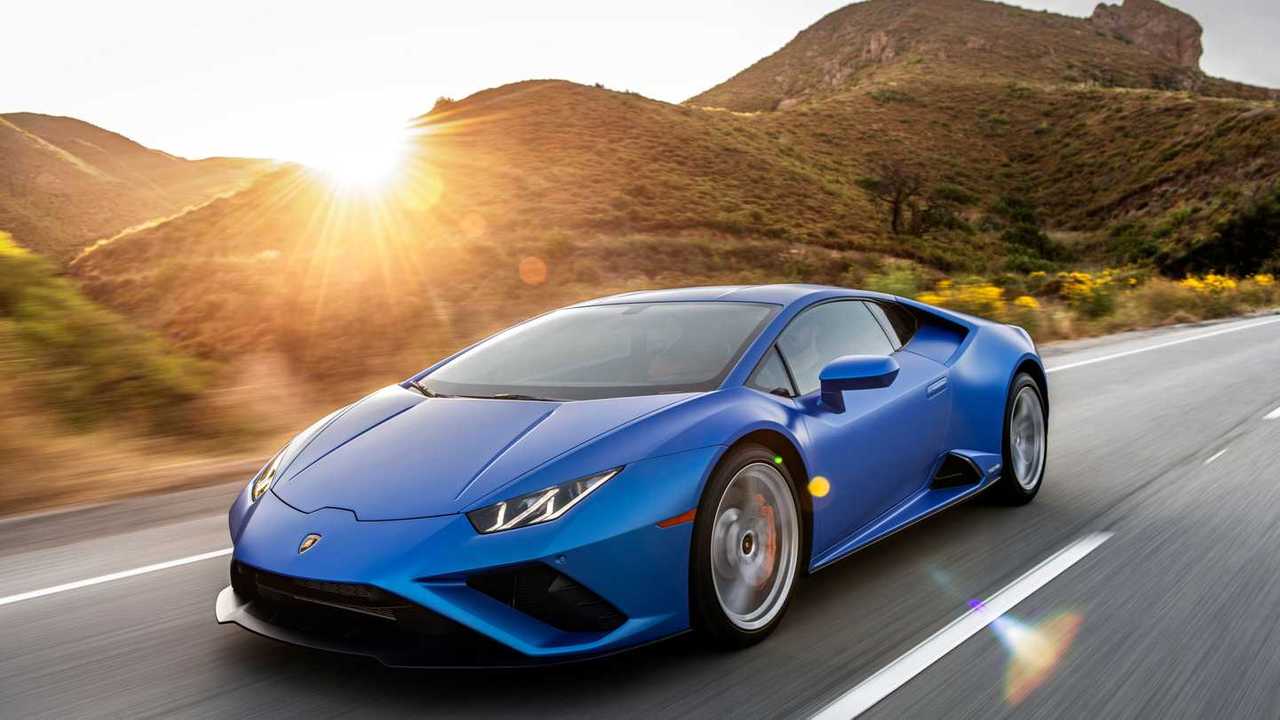 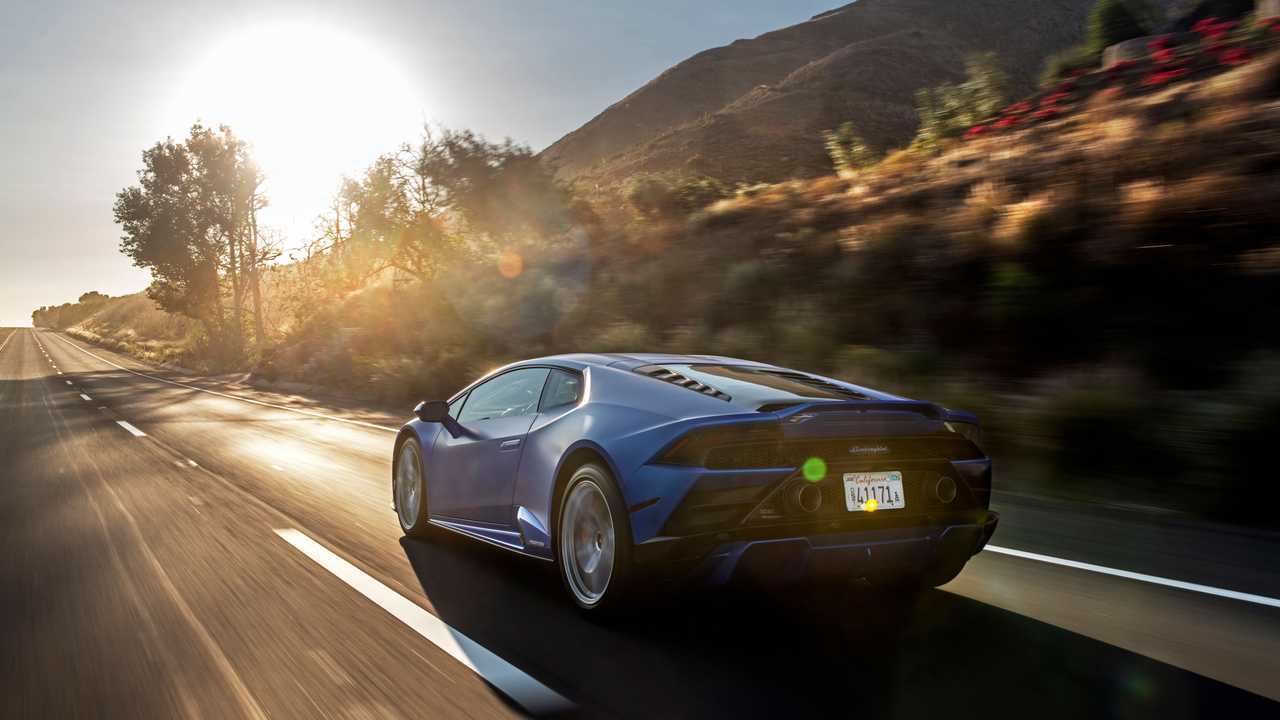 To get a better understanding of what Farmeschi is driving at, Lamborghini invited us out to Willow Springs International Raceway to put the Evo RWD coupe through its paces on a closed course and take the Evo RWD Spyder for a spin on the streets and highways neighboring the track.

We started our initial track session in Strada, the Huracán's most street-friendly driving mode. Even though the main focus of the first few laps was to get re-acclimated to the course layout, we noticed the absence of the standard Evo's rear-steering system almost immediately. Our first stint in the standard Huracán Evo was at this same track last year, and at the time we noted that system made the car feel like it was crab-walking around long sweepers like Turn 2.

Cornering at speed feels much more natural without rear-wheel steer.

Though the Evo RWD might require a bit more steering input to keep the same line at a similar pace (and thus run out of grip a moment sooner), cornering at speed feels much more natural without rear-wheel steer, which often works in concert with the torque vectoring system in at-the-limit situations.

Switching to Sport mode enhances the sensation further, as Lamborghini programmed it to allow for more oversteer than both Strada and the track-focused Corsa mode – the latter mode wants to keep your line tidy to ensure your laps are as quick as possible. 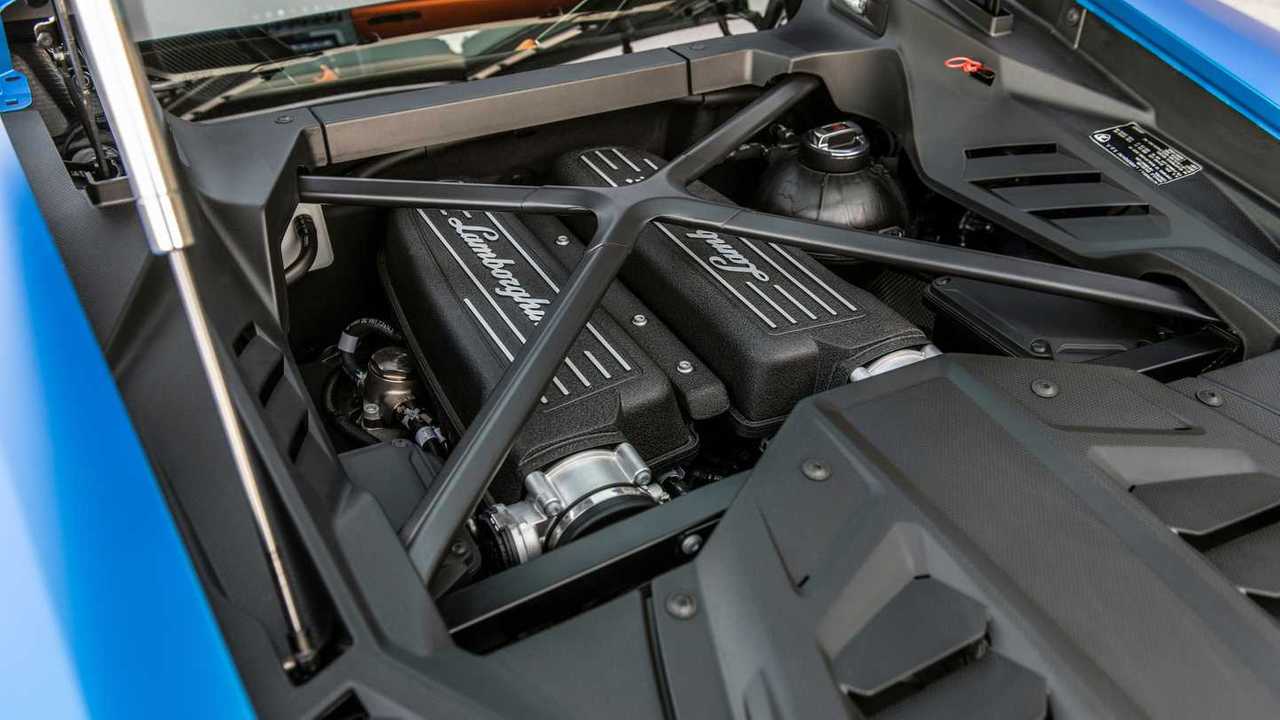 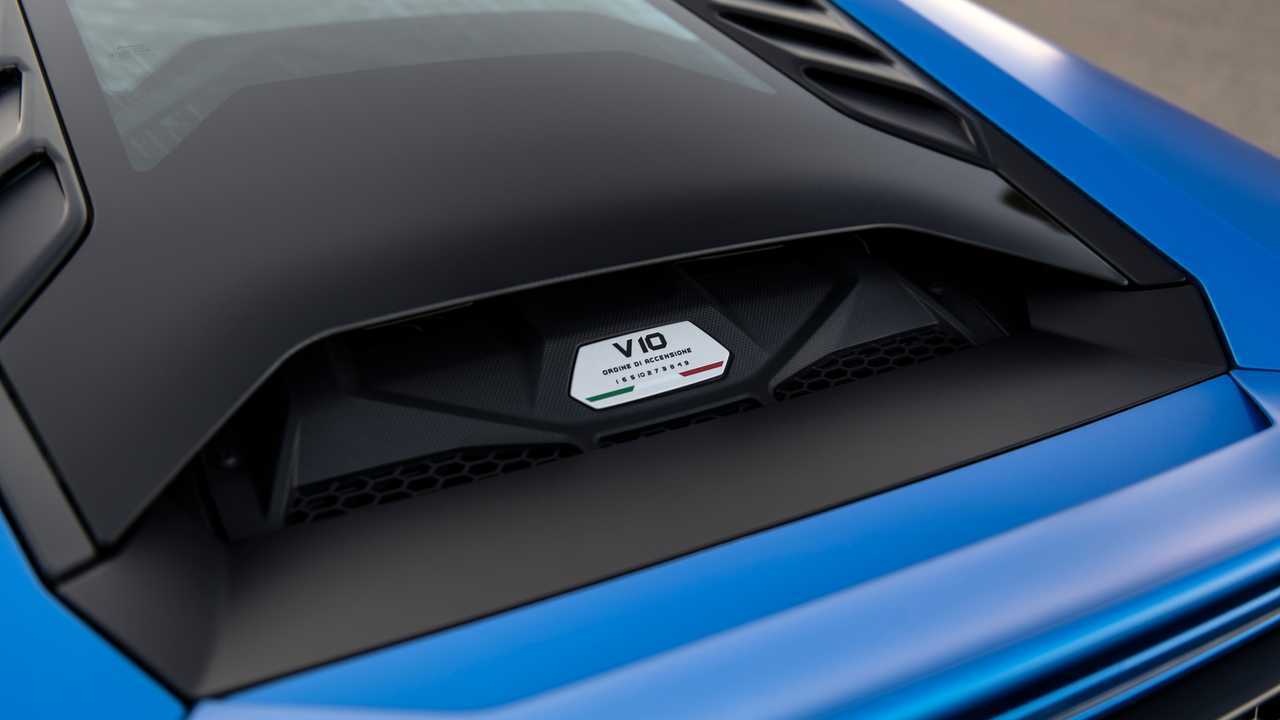 “In Sport mode, we're able to achieve a perfect percent of oversteer with constant throttle,” says Lamborghini's chief technical officer, Maurizio Reggiani. “And that gives you the perception that you have the full functionality of the car under control.”

It's not a “drift mode,” though; on the skid pad, Lamborghini instructors showed us that the system will immediately put the kibosh on donuts and other low-speed hijinks, resulting in little more than understeer. On the track, however, Sport allows for enough rotation at pace to keep things plenty lively before it steps in to save overly-ambitious drivers from themselves.

Switching to Corsa mode and turning off traction control via the button on the console is the ticket for parking-lot shenanigans.

Also aiding the Evo RWD's track-worthiness is a heavily revised aero package that equates to a 73-percent increase in downforce versus the outgoing rear-drive Huracán. This tangible improvement in stability makes itself known as the speedometer approaches 160 mph and even more so when scrubbing off speed with a loaded-up front end.

For those looking for the aforementioned parking-lot shenanigans (or truly unfiltered access to the car's mechanical capability), switching to Corsa mode and turning off traction control via the button on the console is the ticket. But beware: you're truly on your own here, and this ain't no Mustang – you'll need fast hands and feet if you want an unchained rear-drive Huracán to be an obedient dance partner. 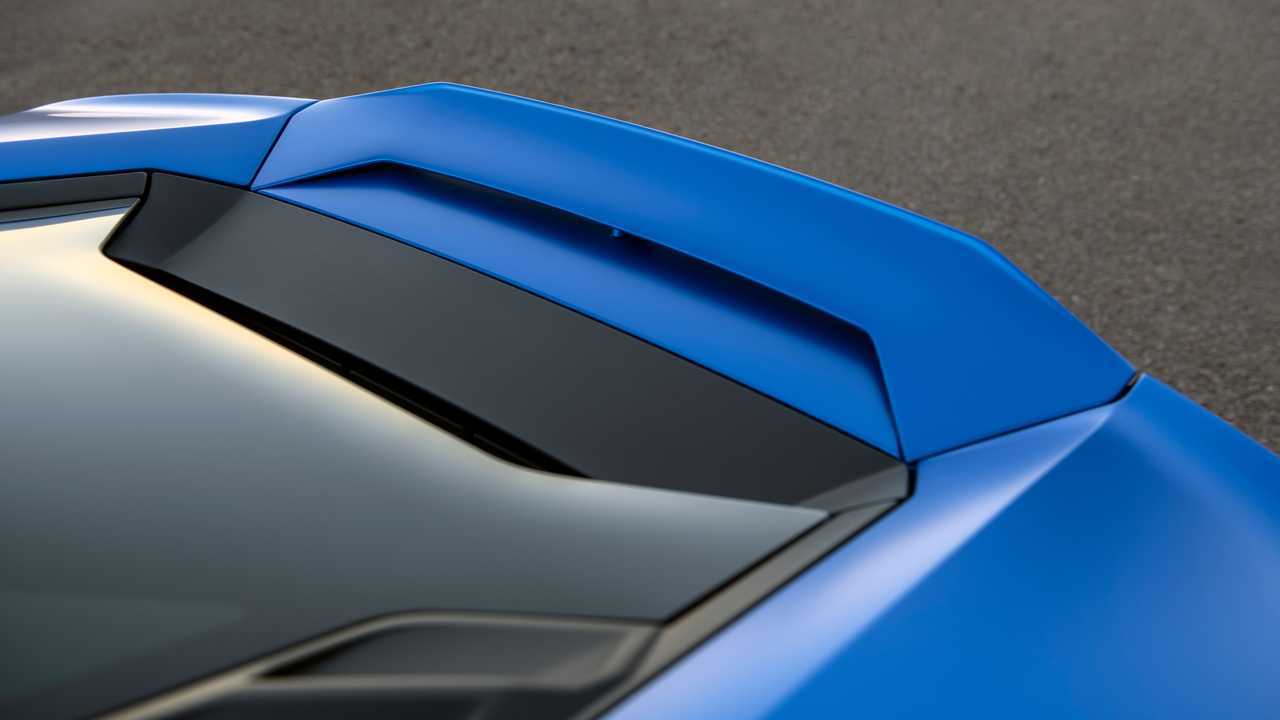 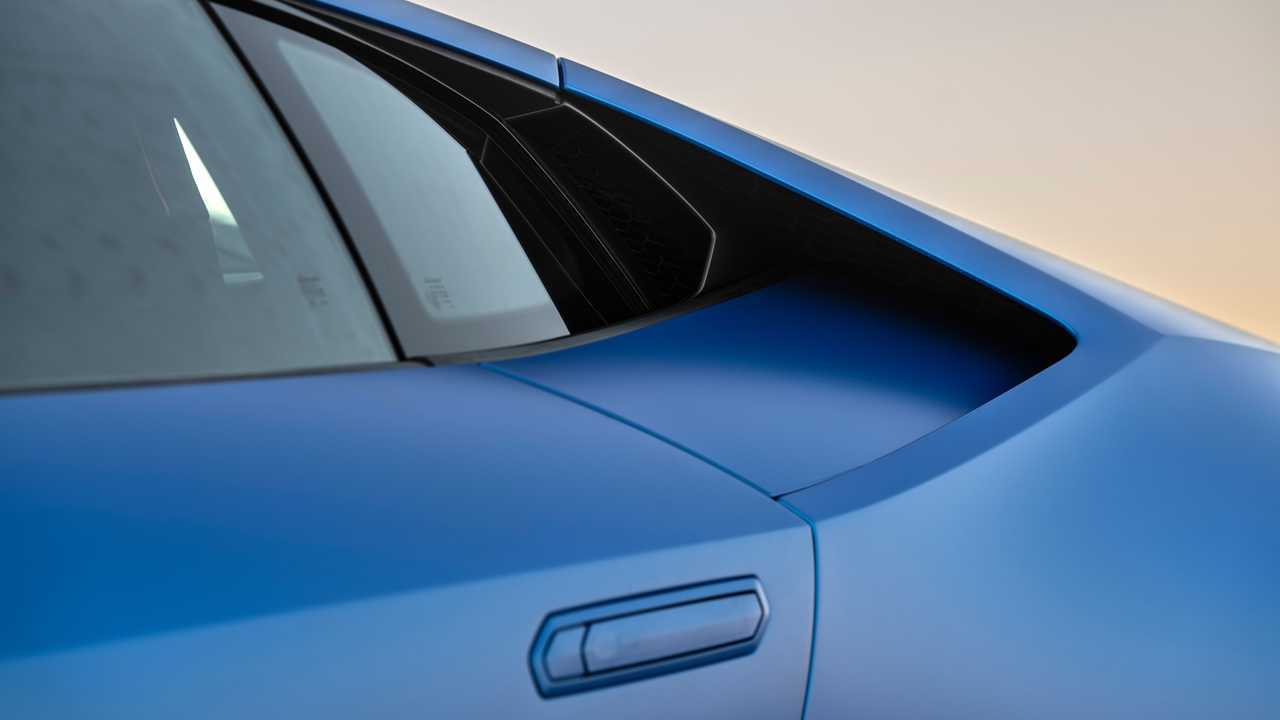 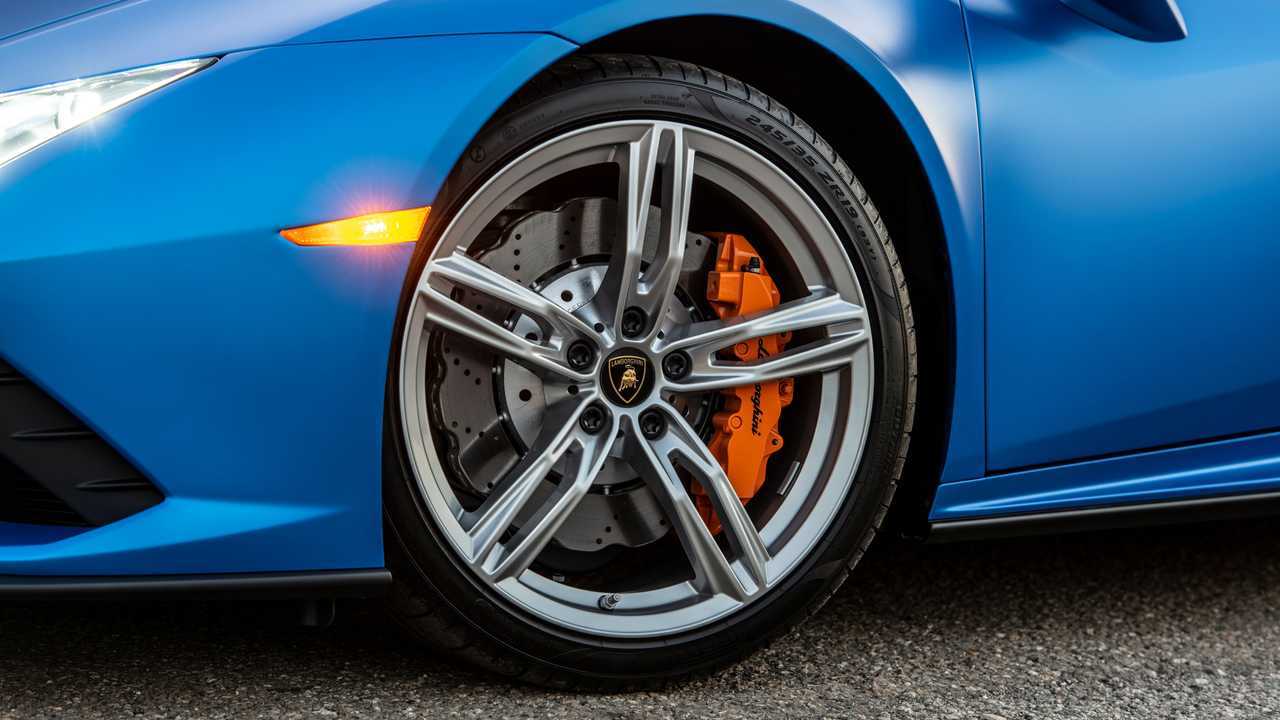 After wrapping up our sessions on the road course and skid pad, we hopped behind the wheel of an Arancio Borealis-hued Spyder and hit the road to find out what the drop-top Evo RWD is like to live with in “everyday” motoring.

It's here where important elements that often go unnoticed on the track come into greater focus, like the updated infotainment system and the comfort of the optional Sport seats, both of which first debuted in the standard Huracán Evo.

We still wish the former had a physical volume knob; multi-touch gesture functions address this to some degree, but there is a bit of a learning curve, and adjustments are never quite as precise as you hope they will be. Occasional input response hiccups aside, the 8.4-inch touchscreen infotainment system is still a huge leap forward from the system in the outgoing rear-wheel drive Huracán. And yes, it has Apple CarPlay. 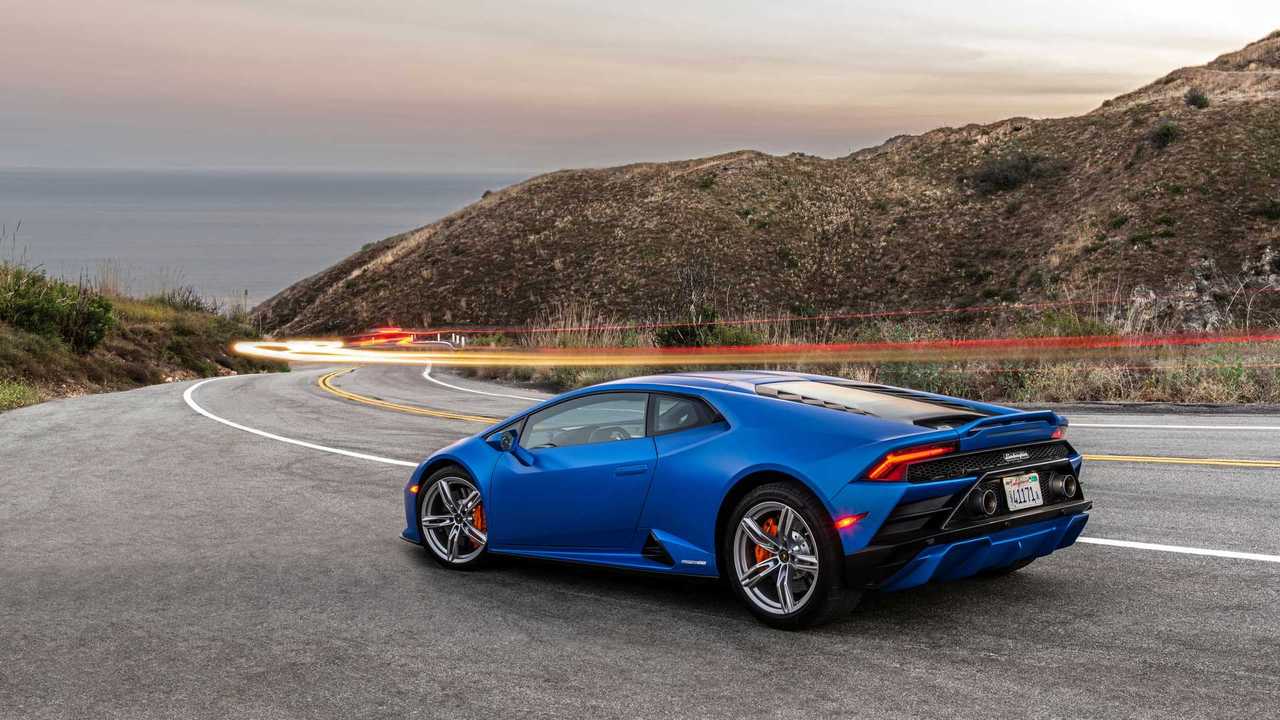 In terms of the buckets, the Sport seat looks the coolest of the three seat options, but it essentially splits the difference between the standard seat and the Race seat in terms of luxury and performance. That equates to slightly compromised comfort out on the road, and not enough headroom with a helmet on for your six-foot, three-inch author in the fixed-roof car. Given that, we'd opt for the standard seats in the Spyder and the Race seats in the coupe.

At $229,428, the Spyder commands a $21,000 premium over the fixed-roof car, and for that you get a top that stows in 17 seconds at up to 31 miles per hour and uninhibited access to the glorious sounds of that V10. Performance purists may scoff at the 260 pounds of added weight that the Spyder brings to the table due to required structural enhancements, but there's never a moment where the drop top feels even remotely out of its depth in the real world.

When Less Really Is More

Aside from losing half a step in the sprint to 60 mph, it's hard to see why someone would opt for the all-wheel-drive car over the Evo RWD. The platform's limits are so high that the standard Huracán Evo's all-wheel-drive system rarely plays a pivotal role out on the street – at the track, the relative simplicity of the RWD model makes it the more earnest driver's car of the two.

But if you're still feeling a bit uneasy about forfeiting the additional performance offered by standard Huracán Evo, consider spending some of the fifty grand you'd save on a racing school. The driver mod has got to be good for a few tenths.