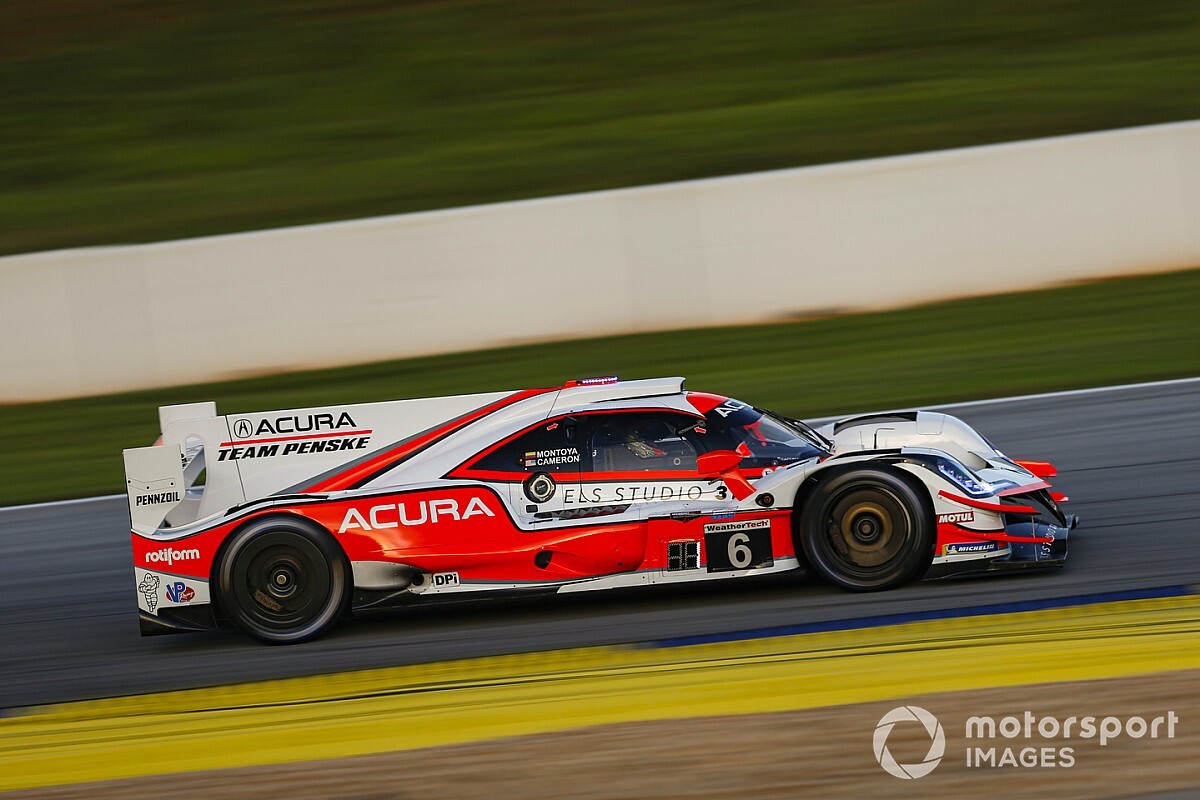 Despite a spin at the start of the race, the #6 Acura Team Penske of Juan Pablo Montoya and Dane Cameron leads halfway through the six-hour IMSA WeatherTech SportsCar Championship round at Road Atlanta, while Porsche heads GTLM and Paul Miller Racing is in charge of GTD.

At the start, there was an immediate caution as Acura Team Penske’s Dane Cameron, who had responded to teammate and polesitter Helio Castroneves getting going, found himself squeezed onto the inside curb by the other front-row starter, Felipe Nasr’s Action Express Racing Cadillac DPi-V.R. Cameron half spun but escaped damage and continued in seventh, but Matheus Leist’s JDC-Miller Cadillac and Dwight Merriman’s Era Motorsport LMP2 Oreca made contact avoiding the sideways Acura, and both limped to the pits.

Nine laps in, Race Control decided that Nasr had been responsible for the start incident and ordered he take a drive-through penalty, which he served on Lap 11. That left Castroneves with a 4.5sec lead over Tincknell, who would soon have a rubbing incident with a BMW that left the German car’s wing mirror on the racing line, obliging a full-course caution at the 25-minute mark.

The Prototypes headed into the pits but Castroneves was pinged for speeding in pitlane, 2kph too fast. He would be obliged to serve a drive through once the race got underway again. Then it was revealed he had also run a red light on pit exit so he would serve a stop and hold for 60sec. Those combined penalties dropped the #7 Acura off the lead lap.

That left Van der Zande up front being pressured by the other Acura of Cameron, with Nasr third, Bourdais fourth, followed by the Mazdas of Nunez and Tincknell. The latter would soon pass his teammate and leave it behind as Nunez was still running on his original tires despite the earlier pitstop. He would later suffer tire failure and consequent rear-end bodywork damage obliging an off-strategy stop with Nunez handing off to co-driver Oliver Jarvis.

WTR pulled in van der Zande from the lead following the Corvette damage, but before the full-course caution was called, and handed off to Ryan Briscoe. The rivals of the #10 Cadillac filed into the pits under caution and allowed the black car back into the lead.

At the restart Briscoe held off the #6 Acura now driven by Juan Pablo Montoya who in turn kept Nasr at bay, while the #55 Mazda now driven by IndyCar ace Ryan Hunter-Reay held off teammate Jarvis. Joao Barbosa ran sixth ahead of Ricky Taylor whose #7 Penske was now back on the lead lap, albeit 36sec off the lead. Around the 90min mark, Jarvis moved ahead of Hunter-Reay to take fourth.

IMSA Radio reported that WTR pulled in Briscoe off strategy with 1hr42min elapsed due to a deflating tire.

That left Montoya with a 3.7sec lead but when the rest of the DPi cars pitted, Briscoe had some 9sec over JPM, who was 3.5sec ahead of Filipe Albuquerque who had taken over the #31 AXR Caddy from Nasr. Close behind was Jarvis but Hunter-Reay was 13sec away from his teammate, and a similar distance ahead of Barbosa.

The next round of stops saw Briscoe retain the lead but came under increasing pressure from Montoya, with Albuquerque third until falling off at Turn 6 while under pressure from the #77 Mazda which now had Olivier Pla in the driving seat. Behind the AXR machine, Jonathan Bomarito was now driving the #55 Mazda, still 11sec ahead of the #7 Acura, in which Castroneves had taken back over from Ricky Taylor.

Briscoe, coming under occasional pressure from Montoya and Pla, pitted seven minutes before the halfway mark to hand back to van der Zande, but when the rest stopped, Cameron not only took over from Montoya, he also took the lead, some 8sec ahead. Behind, Pla ran third ahead of Albuquerque, and Bomarito.

Porsche’s Nick Tandy avoided the Prototype melee at the start to take the lead, chased by Tommy Milner’s #4 Corvette C8.R, the BMW M8s of Jesse Krohn and Connor De Phillippi, Antonio Garcia’s Corvette and Laurens Vanthoor in the #912 Porsche.

Following the yellow-flag stops, Milner was leading Tandy, Vanthoor, Garcia, de Phillippi and Krohn. Then Vanthoor was issued a penalty for running over pit equipment, forcing him to serve a drive-through penalty.

Milner was serenely running 1.5sec at the front of the class when the left-rear tire let go. He limped the car around and the tire carcass fell off at pit entry, obliging a full-course caution.

Following the restart, Fred Makowiecki had taken over the #911 Porsche and was in the lead ahead of Garcia but lost out at the green flag to the Spaniard, the pair chased by the BMWs now piloted by Bruno Spengler and John Edwards. But both M8s also got ahead of Makowiecki who was soon under pressure from its #912 stablemate, now piloted by Earl Bamber.

Around the 2hr mark, Makowiecki re-passed Edwards for third but soon afterward had to stop as the hood had popped up on the 911, and it was taped up while receiving new tires, a fresh load of fuel, and the reinstallation of Tandy in the cockpit.

Tandy then started flying, and his earlier stop meant he had warm tires when the rest of the GTLM cars emerged from pitlane. He therefore easily outbraked the #3 Corvette – now driven by Jordan Taylor – down the hill into the chicane. De Phillippi and Krohn continued in third and fourth ahead of Vanthoor’s Porsche, while Gavin was still trying to recover from the unlucky Milner’s tire failure and would soon be struggling to keep Tandy from lapping him. In fact Corvette’s issues got a little worse still as De Phillippi moved his BMW ahead of Taylor to take second, and before the halfway mark the second BMW of Krohn had also passed the yellow C8.

At the second yellow, Steijn Schothorst in the GRT Lamborghini and Jeff Westphal in the Scuderia Corsa Ferrari 488 stayed out and moved into first and second ahead of Snow, Michimi, Foley, Goikhberg, and the Lexus RC Fs of Montecalvo and Michael De Quesada. A failed attempt to pass Schothorst left Westphal vulnerable to Snow, who duly passed to take second place.

A couple laps later, Goikhberg made an attempt to pass Foley and spun the Turner BMW, obliging Montecalvo to trip through the grass to avoid. Goikhberg would compound his error with a spin, sending the De Quesada-driven Lexus off to avoid, but Goikhberg was not punished for his clash with the M6.

Following the pitstops, Bryan Sellers led in the PMR Lamborghini ahead of Michimi’s Acura, Montecalvo’s Lexus, Goikhberg, Gar Robinson in the Riley Mercedes,and Ryan Hardwick who had taken over the Wright Motorsports Porsche from Heylen. Goikhberg would pit his NSX with heavy damage to the hood, but the MSR team serviced it rapidly and was able to send teammate Trent Hindman out without losing a lap.

As half distance approached, the PMR Lambo now steered by Corey Lewis held a 15sec lead over Matt McMurry who had taken over the #86 MSR Acura, while Aaron Telitz – now driving the #12 Lexus – ran third, well ahead of the WeatherTech Scuderia Corsa Ferrari 488 now driven by Toni Vilander, Daniel Morad in the second Lexus, and Heylen who was back in the Wright Porsche.