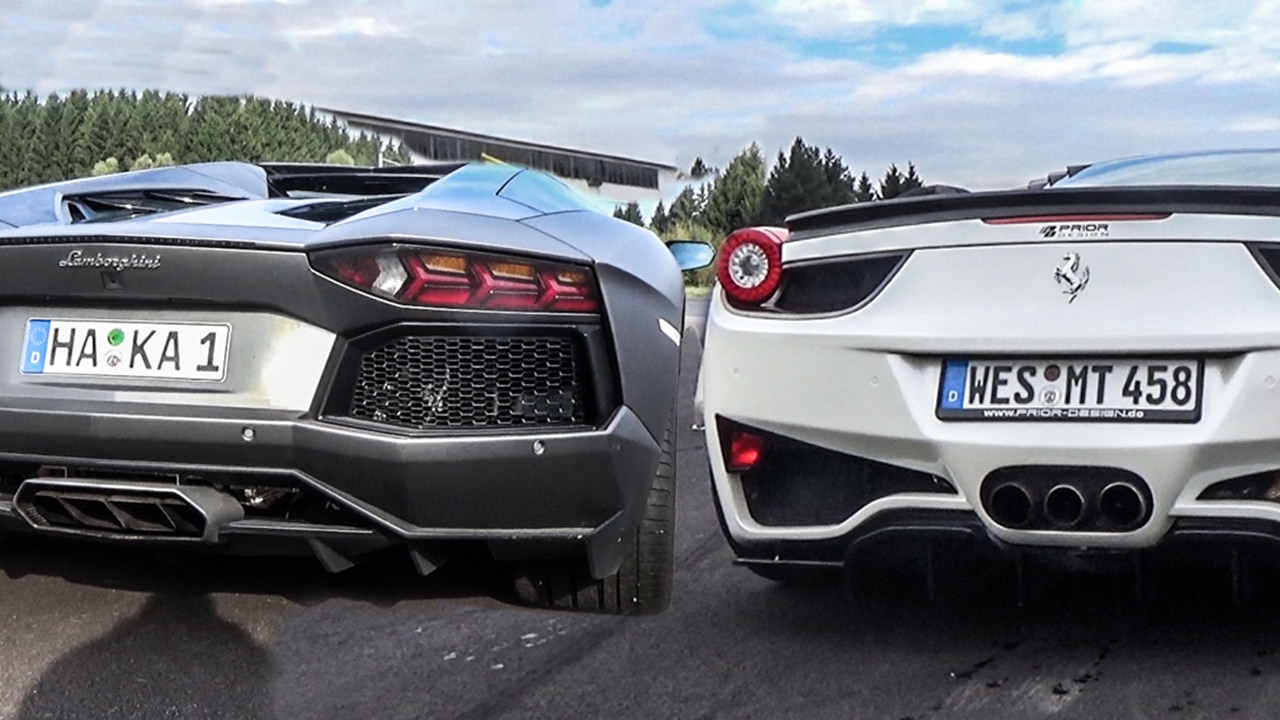 
Exotic cars are some of the the most visually stunning machines in existence, yet their designs ring hollow without the music of a powerful engine. The sound of an exotic car can be just as glorious as its appearance. And since it is fun to compare the looks of these high-dollar automobiles, comparing the sound is naturally joyous as well. The video above features Italian musicians, Lamborghini and Ferrari. There are various models shown, but the frontmen are the Ferrari 458 Italia and the Lamborghini Aventador. So, which sound do you prefer?

Right of the bat, there is a clear difference between these roaring beasts, namely that the Lambo has 50% more cylinders. Most people would simply write off the Ferrari and not even have this comparison, since a V12 always sounds more beautiful than a V8. Or does it? Sound may be less subjective than appearance, but at this level of performance, both the V8 Horse and the V12 Bull sound amazing!

But wait, there is another caveat. As you can tell, some of the cars (especially the Ferraris) seemed to have been modified or tuned. This may point towards an unfair comparison, but we since we do not know the extent to which any of the cars have been changed from stock, it is more fair to ignore this discrepancy. And since there are multiple examples of each model featured in the video, the true sound of each car is revealed.

The Aventador sounds like it is from another planet! The low rpm growl turns into an extraterrestrial scream at high speeds. It sort of whistles, only in a low note that reminds us of a spaceship! Based on the youtube comments, the Lamborghini is the favorite for most people, and it is easy to see why. But what if that beautiful V12 sound is not your cup of tea?

Well the Ferrari might be the answer. The V8 immediately lets everyone know that it is meant for the race track. The 458 is quieter at slow speeds but the sound quickly builds until it is billowing out of the exhaust, howling like a savage beast. With every increasing gear and RPM, you can hear Ferrari’s legacy of motorsports success. So while the Lambo is out of this world, the Ferrari is king of this world.

You might like the Lamborghini, or you might like the Ferrari, and if you are a true car person you like both! Sure, one can be your favorite, but we can we all agree that both of these exhaust notes are preferable to a car without one? This includes both Honda Accords and Porsche Taycans. And with that small jab at electric vehicles, we conclude. Happy watching!