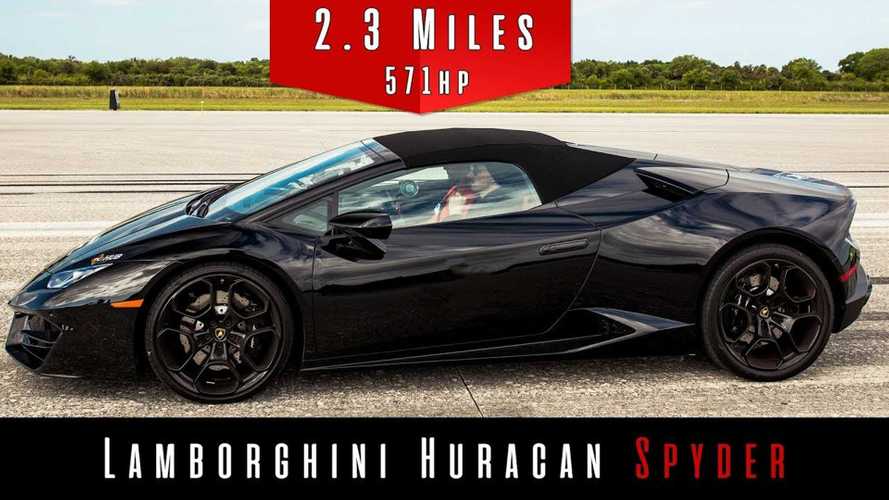 
If you’re having a rough start to 2020, hopefully this video helps. We struggle to think of any Lamborghini top speed video that wouldn’t put a smile on gearheads’ faces, and in that department, the V10 shriek of a Huracán Spyder doesn’t disappoint.

These Lamborghinis Are Faster:

We’re back at Florida’s Johnny Bohmer Proving Grounds for a flat-out speed run, and a stock Huracán Spyder is the car in question for this sprint. To refresh your memory, this stretch of runway is the same strip once used by the Space Shuttle so it’s extremely flat, and it offers 2.7 miles of concrete for acceleration before drivers have to lift. Being on Florida’s eastern coast it’s also at sea level, so engines get plenty of air to mix with fuel. And the weather is usually pretty good as well – this run saw air temperatures the mid-70s (mid-20s Celsius) with modest humidity around 50 percent. It other words, it was an optimal day for going fast.

Going by the numbers, a stock RWD Huracán Spyder produces 571 horsepower (426 kilowatts) and should top out around 200 mph (322 km/h). After a short intro the video cuts to a windshield view of the pass, which only used 2.3 miles of runway this time around. The speedo climbs impressively to 190 then slows dramatically to a terminal velocity of … 196 mph.

Yes, that’s not 200 but it’s not exactly slow either. It’s also possible the Lambo’s speed could’ve inched slightly higher as well; acceleration had certainly dropped off but we only saw 196 on the readout for a couple of seconds. With more space, perhaps that 200-mph goal could’ve been reached.