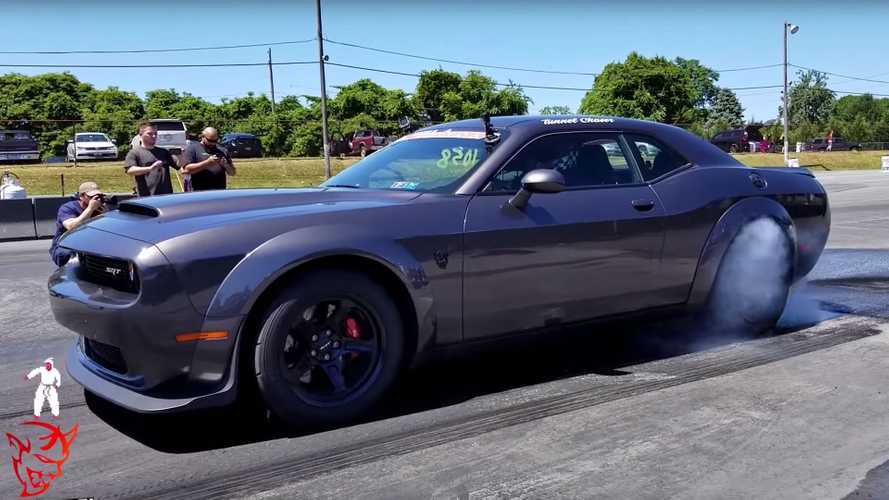 High-dollar performance is great, but at the drag strip, the Demon is hard to beat.


Here’s a smart rule for anyone that owns a supercar: Don’t take it to the drag strip. And if you do, be very careful about lining up next to any Dodge Challenger, lest it be an 800-plus-horsepower SRT Demon. If you aren’t sure why we’re issuing that recommendation, let this video from YouTuber Demonology act as an explanation.

The compilation features a number of supercars from some of the world’s most prestigious automakers. But Demonology’s allegedly stock Demon isn’t concerned with prestige, as it mercilessly outruns all comers. The first to fall is the all-wheel-drive Porsche 911 Turbo. We can’t tell whether it’s the 540-hp base Turbo or the 580-hp Turbo S, but against the 840-hp Demon, the 911 and the flat-six mounted at its tail fall hopelessly short. A second run confirms the Demon’s dominance.

Things don’t change for the Demon when it shifts its focus to Italy and the Ferrari 488 GTB. Like the 911, the 488 is at a significant power disadvantage, with its twin-turbocharged V8 pumping out 660 hp. That’s a lot for a 3,200-pound car, but it’s nowhere near enough to combat the Demon, a car that’s up half a ton on the mid-engined Italian. Following that victory, we switch from a gray Dodge to a red one.

But judging by the Hoosier rubber filling the wheel arches, we’re less certain that this particular Dodge is as stock as Demonology suggests. To be fair, though, the reaction time of the Ferrari driver in this video is so poor the Demon could have been running wooden wagon wheels and it still would have won.

Things don’t improve for Italy when the Demon faces off against the V10-powered, 610-hp Lamborghini Huracan, which loses to the Dodge not just off the line, but in a rolling start, as well. The Lamborghini might be lighter and (likely) feature an all-wheel-drive system, but in a straight shot, it can’t hold a candle to a Demon.

And neither can the final entries in this compilation. The first victim is a McLaren 570S, although to our eyes (and one of the commenters), it looks more like a 675LT, and a Spider at that. It doesn’t much matter whether it’s the 562-hp 570S or the 666-hp longtail, as the Hoosier-shod Demon leaves it in the dust. The same Dodge then proceeds to whoop the most powerful rival in this video, a 710-hp 720S. The lime-green Mclaren’s driver appeared asleep at the switch in the first run, but made some improvements in later sprints. It was all for naught, though, as neither the orange nor the gray Demon could be caught.

So what does this video tell us? On the surface, the obvious answer might be that supercars shouldn’t challenge a Demon. On the other hand, is it really surprising that a purpose-built drag car can beat purpose-built track cars on a drag-prepped strip? Not really. While it’s cool to see the Demon do its thing and embarrass some high-dollar monsters, it’s worth remembering that a misused tool is never going to be as effective as one that’s designed for the job at hand.